If you’ve never created an animated explainer video before, the thought of it might seem intimidating. Where do you begin? Do you record a voiceover, then make the video, or is it the other way around? And how do you write a video script anyway?

We’ve got the answers right here! Learn exactly what you need to do to make a great animated explainer video:

You can’t make your video without a script—which is why writing the script is the very first task you’ll want to tackle.

Let’s look at each one of those components in greater detail.

You’ll want to begin your script by talking about a problem your customers have. Not only does this tactic get viewers’ attention, but it also creates the perfect segue for talking about your solution.

One popular way marketers do this is by telling a story about a character who represents a customer persona. For instance, take this video by Triggermail:

In the video, Jill’s a marketer who’s sending out batch-and-blast emails. Batch-and-blast means that all her leads are batched together and blasted with the same email, regardless of their interests.

Jill doesn’t like this approach. She dreams of being a data ninja, with the ability to personalize and automate emails to leads. As you can see, this sets the stage for the solution, Triggermail, to be introduced.

This video is a great example of how you can use storytelling about a customer persona to follow the problem-solution format. 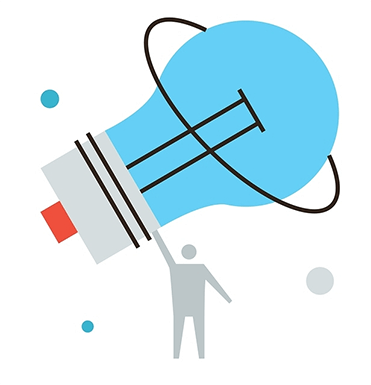 After you’ve identified the problem your customers are having and elaborated on why that problem is well, such a problem, now you’re ready to reveal the solution. Which is, of course, whatever it is you’re selling.

Don’t be shy. When you make your solution known, be sure to mention the name of your product–twice. Some of your prospects won’t watch the entire video, but this way if they cut out early, there’s a good chance they’ll still remember your brand name.

This is also the point in the video where you’ll want to clearly state what your product does. For instance, in the Triggermail video, we learn that Triggermail software analyzes customer data, then lets users set up customizable triggers, so they can automate personalized emails to their leads.

At this point in your script, you want prospects to understand how they’ll benefit from your goods or services. For instance, what’s in it for them if they purchase your solution? How will their life improve? 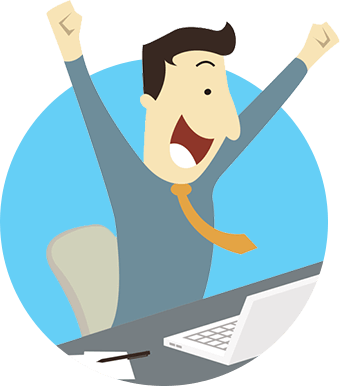 Here’s where you’ll want to hammer home everything that makes your solution so amazing.

Again, let’s use Triggermail as an example. As you recall, the software automates personalized emails. However, that’s not a benefit.

A benefit is what Jill would enjoy as a result of using the software (more time, better results, happier leads, etc.). So, in this section of your script, you’ll want to forget about your product’s features and instead, focus on why your prospects will love what it is you’ve got.

A call-to-action (CTA) is a short directive telling prospects what they should do after watching your video. Naturally, this will differ depending on what you’re selling, but you might say something like, “Visit xyz.com now,” or “Download ABC app now.”

You’ll notice in those examples that the language is very direct. That’s because you never want to give a CTA that’s wishy-washy or tentative.

For instance, which do you think is more powerful: “If you think you might be interested, check out xyz.com” or “Go to xyz.com now”? Yep, you guessed it—the latter one.

The CTA is the last part of the script-writing portion of the process. As you can see, it’s not too hard to write a script, although it might take some time to get it just right.

For a faster solution, you may want to consider Automatic Script, copywriting software that asks you questions about your product or service, then uses copywriting formulas to create high-converting video scripts for you.

No matter which route you choose, once you have a script you’re happy with, it’s time to move on to …

A storyboard is the next thing you’ll want to do, and it’s a lot like it sounds like—you’re going to put your story down on paper, by actually visualizing the animations that will accompany your script.

Now, you might be tempted to skip this step, because it sounds like too much work. Don’t! There are plenty of great reasons you’ll want to take the time to create a storyboard: 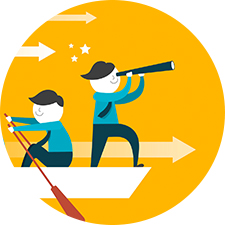 When you start creating scenes to go with the words you wrote, you may find that you have too many words in one scene and not enough in another. That’s why this step is so important!

By matching the words in your script to corresponding scenes, you’ll get a sense for how well your story flows, before investing time and money into a video with poor pacing. 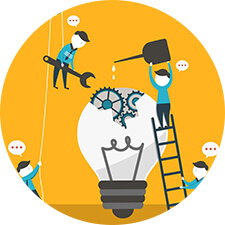 Creating your video on the fly means you run the risk of putting in time and effort to make something that isn’t fully thought-out and ultimately, will need to be scrapped later. As with most any other endeavor, by preparing your animated explainer video in advance, you’ll get a better result. 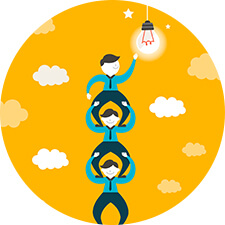 While you may have a great concept for the video, none of your team members can see what’s going on inside your head. With a storyboard, you can show them. This will get your whole team on board, since everyone will understand how the final video’s supposed to look.

As you can see, storyboarding is an important step you won’t want to skip!

So, how exactly do you create a storyboard? Our recommendation is to draw your storyboard out by hand or to use free software like Storyboarder.

Once you’re happy with your storyboard, you’re ready for …

Now you’re ready to record the voice-over. But don’t you record it. Instead, hire a professional to do it for you.

While it may be tempting to try to save money on this step, we don’t recommend recording your own voice-over for the following reasons:

Sorry, but it’s true. Voice actors are trained in voice modulation, so they can achieve the right pitch, inflection, and tone. As a rule, they usually do this way better than people who’ve never undergone this type of training.

Think, for instance, of audio books. Your enjoyment of an audio book depends, in large part, on who’s narrating it. The same holds true for animated explainers.

Animated explainer videos succeed or fail, based on the quality of their audio. After all, if people don’t like the audio—because it’s monotone or low-quality or whatever—they won’t stick around to watch the entire video.

By hiring a professional voice actor, you can make sure your video is as engaging as can be, resulting in more views, likes, and shares.

It Gives Your Brand an Unprofessional Image

When your marketing video seems low-quality or cheaply made, people develop a poor impression of your brand.

Naturally, that’s not what you want people to be thinking after watching one of your videos. By hiring a voice actor to read your script, your video will seem more professional, and its overall quality will be much better.

The Voice-Over Creates the “Feel” of the Video

A voice actor can communicate a range of feelings with their voice, like elation, solemnity, excitement, or sadness. These feelings are what give your video personality and make it interesting to watch.

That’s why it’s safe to say that a voice actor sets the entire tone of an animated explainer video … at your direction, of course.

Once the voice-over is finished, you’re ready for …

You’re now ready to compile everything you need to make your video. While the Toonly library carries an extensive collection of music, characters, scenes, objects, and typographies, you may find there are a few additional graphics you’ll want to use, like your brand logo for instance. 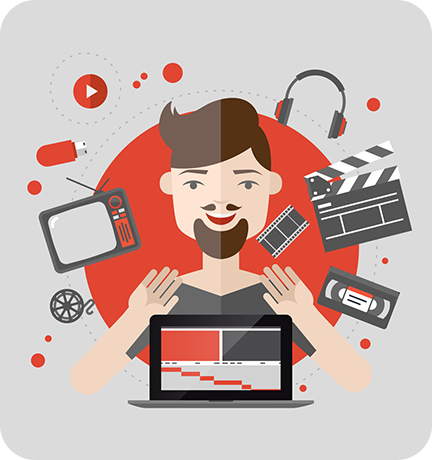 So, during this step, you’ll want to determine what—if any—graphics you’ll need to source and then, either have a graphic designer create them or acquire them from a photo-sharing site online.

Additionally, you might want to collect music or sound effects for your video. Because Toonly provides 20-100 audio files, depending on the membership you get, it’s unlikely you’ll need to do this. Still, it’s something to consider when you reach this step. 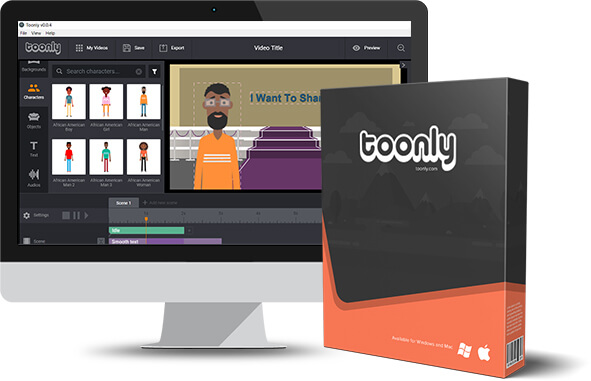 With Toonly, it couldn’t be easier for you to create an amazing animated explainer video—even if you’ve never made a video before in your life! In fact, the software is designed to be very intuitive, so people without video production or editing skills can get up-to-speed quickly.

Simply choose one of Toonly’s done-for-you backgrounds, upload your voice-over and graphics, drop characters into the scenes you select, then make adjustments to get things just the way you want them. Voilà, you’re finished!

Truly, it’s a piece of cake, and of course if you run into problems, you have tons of different avenues to get help. For instance, you can view our Toonly tutorials, read the Toonly FAQs, contact our support team, or pose questions to our super- engaged Toonly Design Group on Facebook.

By following the process we’ve laid out, you’ll find that it’s easier than ever to make your first animated explainer video … so easy, in fact, we think you’ll actually find it fun! Plus, you’re going to love the results. Time and time again, animated explainer videos have been proven to be an unbelievably effective way to entertain, teach, and convert your audience. 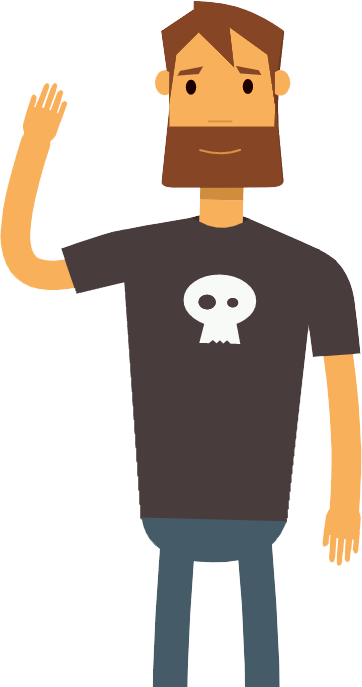 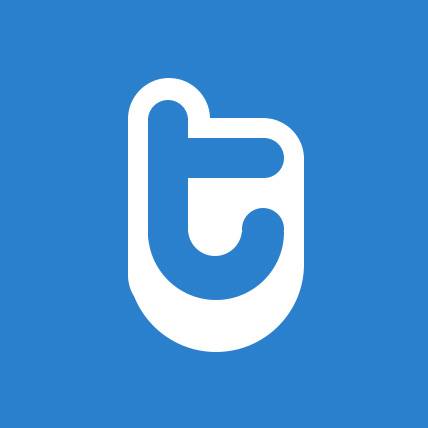 © Voomly LLC. All rights reserved.
Third-party components are the property of their respective owners.

This site is not a part of the Facebook website or Facebook INC. Additionally, this site is NOT endorsed by Facebook in ANY WAY. Facebook is a trademark of Facebook INC. You understand this to be an expression of opinions and not professional advice. You are solely responsible for the use of any content and hold Bryxen, Inc. and all members and affiliates harmless in any event or claim. You can also safely assume that I get paid anytime you click on a link on this site. We recommend that you do your own Independent research before purchasing anything.

Disclaimer: We do NOT believe in get rich quick programs. We believe in hard work, adding value and dedication to reach your goals. It’s a fact that one that does not take action will see no results whatsoever. The results featured on this page are not the norm and are extraordinary results from hard work, commitment and dedication by following through and taking action. You will get no results whatsoever if you assume by soaking up information products, joining program after program your life will change with riches. This is not for you. Your results are based upon your actions. If you want a magic button that will fulfil your life with riches then please leave this page and do NOT purchase. Our products are intended to help you share your message with the world whilst growing your business. We don’t make any guarantees about your own results because we don’t know you. Results in life are solely based on decisions made. We are here to help and guide you to move forward faster by giving you awesome content, direction and strategies to reach your end goal. Please check the content thoroughly on this page and that you are committed to taking relentless action and will put in the effort before you decide to make a purchase. If not then please leave this page and do not purchase.